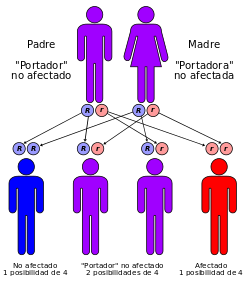 It receives this name from the British pediatrician Frederick Batten who first described it in 1903.

Despite being a rare disease, it corresponds to the most frequent group of hereditary neurodegenerative diseases of childhood.

Late childhood variant of NCL is produced by the alteration of several genes, one of which is CLN6, which usually manifests in childhood between 3 and 8 years old in the form of a progressive deterioration of mental and motor functions, epilepsy and vision loss.

These alterations are due to the accumulation of a substance called ceroid-lipofuscin, which is a mixture of proteins and phospholipids that settle in different cells of the organism, mainly in brain and retina.

It has an autosomal recessive inheritance pattern so that when both parents are carriers of each of the defective gene two copies, they have a 25 percent chance of transmitting it to each of their children.

CLN6 gene therapy is currently being studied through a clinical trial in the United States. With this type of treatment, it is attempted to transport the normal gene through a vector virus so that the ability to synthesize and secrete the normal protein in the affected child can be generated.